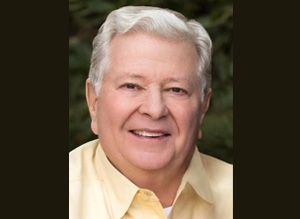 THOSE THAT WORKED WITH VAL OVER THE YEARS WILL TELL YOU THAT VAL WAS KNOWN FOR WALKING JOB SITES, AND TALKING TO THE CREWS. HE MADE A POINT OF GETTING TO KNOW PEOPLE, SO HE COULD CALL THEM BY THEIR NAME.

Val Staker was born and raised in Murray, Utah. He attended the University of Utah, but quickly decided that his career was calling. He started working for Pollard Asphalt, and realized two things: there was a world of opportunity in the asphalt business, and the best way to take advantage of the opportunities he saw was as a business owner.

In 1969, Val and his father Stu borrowed $5,000.00 and together with his brother Gordon formed Staker Paving and Construction Company, Inc. The company was soon recognized for its work supplying rock products and asphalt paving, as it became one of the largest asphalt manufacturers in the Western U.S.

Val Staker’s career in the asphalt paving industry has been very successful. Staker Paving and Construction eventually merged with another company, CRH, in 1995, a Fortune 500 company, with locations worldwide. As a result of the merger, Val assumed a significant and visible leadership role. Under his watch, yearly sales in 1995 were $750 million. Staker Paving merged with Jack B. Parsons, another Oldcastle subsidiary, in 2001. Staker Paving and Parsons were both family-owned Utah businesses that had decades of business experience, and both companies joined Oldcastle in the mid-1990s.

Val’s career was founded on sound principles that served him and others well:
 honesty,
 respect,
 fairness and,
 a relentless dedication
to quality.

Those that worked with Val over the years will tell you that Val was known for walking job sites, and talking to the crews. He made a point of getting to know people, so he could call them by their name. Val was deliberate and real, and had a genuine desire to interact with his employees. He had a way of making everyone feel valued and important, which in turn, instilled loyalty to him and the company.

Val’s habit of empowering his people to make decisions – right or wrong – mentored many along the way. He was adamant that in life you need to commit to what you do, and do it, and in this aspect, like many others, he led by example. This sometimes spilled over into his personal life – he liked to drive fast, getting from point A to B, quickly. Once while driving his Porsche on I-15 he received a ticket for speeding, which he protested in court, saying that Porsches were made to be driven fast, so it was perfectly safe. The fact that he spent his career actually paving many of the roads, and a lot of I-15 here in Utah, could certainly support his theory.

Val retired from Staker Parson Companies in 2001. He left a legacy of professionalism in his industry and his community. Today, Val is enjoying his retirement, his four children, 22 grandchildren, fishing, traveling and watching the Utah Jazz play basketball.