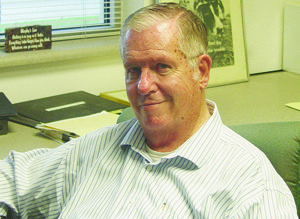 OVER THE 48 YEARS THAT MONT WILSON DEVOTED HIS EFFORTS TO THE PEOPLE AND PROJECTS IN THE CONSTRUCTION INDUSTRY, MONT ALWAYS WORKED TO MAKE THE INDUSTRY A BETTER PLACE AND ALWAYS LIVED BY THE NOTION TO GIVE MORE THAN YOU RECEIVE.

Mont Wilson can be summed up as follows: He was an avid learner who was committed to exactness and consistency, and he was also a mentor and friend. He created a legacy of listening, guiding, caring, and being generous with his time and his knowledge.

Over the 48 years that Mont Wilson devoted his efforts to the people and projects in the construction industry, Mont always worked to make the industry a better place and always lived by the notion to give more than you receive. Mont was well respected by those in the industry, regardless of company or position. Mont always enjoyed the personal (people) side of construction – he believed he had the biggest influence on people during one-on-one conversations.

Mont was born in Payson. He was known as “John” by solicitors or by those who knew him from his Army service, but his friends and his family always called him Mont.

A well-read man and a lover of learning, Mont could carry a conversation on almost any topic. His formal education included graduating from Payson High School and obtaining a degree in Civil Engineering from Brigham Young University. After graduation, Mont started his career with UDOT as a resident engineer who was responsible for managing a staff of surveyors, inspectors, and technicians, along with other engineers. Mont progressed through the ranks of UDOT, eventually developing engineering standards and new methods and procedures in the areas of surveying, mapping, design, and inspection. Mont later moved over to the contracting side of the industry working for J.B. Parsons, Staker Paving and fi nally Granite Construction. While at Staker Paving, Mont was instrumental
in helping to develop a computerized estimating system.

For those that knew Mont, know that he was committed to being extremely accurate and consistent in his “numbers.” While working on a project at Dougway Proving Grounds, and returning to Salt Lake, he ran out of gas. His associate Scott Fernald, who was with him in the truck, rhetorically asked him if he knew he was low on gas, to which Mont replied
that he did, and continued on with a question of his own: how could you know exactly who much gas the tank actually held until you actually ran the tank dry? His exactness with numbers was legendary.

Most importantly, Mont was a mentor to many in the industry. Mont’s willingness to spend as much time as was needed to teach, discuss, and joke about work is what made Mont such a great person. As mentioned previously, Mont would rather be one-on-one with someone rather than in front of a crowd. Chris Faulhaber described what it was like to be mentored by Mont as follows: “Mont was such an inspiration to my career and a good friend. He helped me down a path that has led to my current success and I truly believe I wouldn’t have made it here if not for him. I greatly appreciate the time I was able to have Mont be my mentor and influence me.”

Mont had a Hall of Fame career in the highway construction business in Utah and other western states. He was named Engineer of the Year in 2005 by the Associated General Contractors of Utah. If you drive on a state or federal highway anywhere in Utah or use a runway at the Salt Lake International Airport, you can bet that Mont has been there and had a hand in blazing the trail. Mont was known to many as “the professor” and was a leader in our industry.