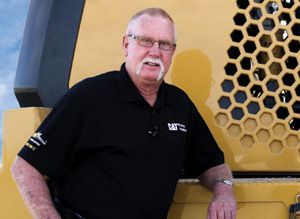 “When you get done with a road, it’s there, for God and everyone to see. No excuses. I’ve tried to live my life that way too.”

Larry Brown began his career in the equipment business in 1971, working for Century Equipment as a part-time parts guy while going to school at the University of Utah. He graduated with a
B.A. in Business Management.

After graduating, he started working full time, at Century Equipment, and was promoted to Ag and Construction sales. Larry’s first machine sale at Century was a new Case 580B backhoe that he sold for $12,500. Larry would continue selling for Century Equipment until 1977, when he left to become the new paving equipment salesman at Cate Equipment. Larry’s sales career blossomed at Cate and he quickly became regarded as an expert in the paving industry.

Larry continued working at Cate Equipment for 24 years. He refined his craft, made relationships that have lasted his entire career, and became known as an industry expert. In 2001, Wheeler Machinery made a big commitment to the paving industry – one which caught Larry’s attention. In April of 2001, he made the move to Wheeler Machinery and in the 17 years with Wheeler, he grew their market share from 20.4 percent to 79.9 percent. Larry was a consistent top PINS winner in paving across North America.

Larry is highly regarded among his peers as being honest, genuine, hardworking and direct. His sense of humor makes it very easy to be around him, and most can easily remember laughing out loud over his jokes or anecdotal stories. Larry has earned the respect and admiration of both his competitors and his customers.

After a long and successful career in the paving industry, his best advice is:
• Build relationships. They are the key to a successful career and a successful life. There are lots of quality people in the construction industry. Win people’s trust, and more importantly, go out of your way to keep it.
• Help your customers make money. I always found that when I helped them make money, I made a little money, my company made a little money, and we were all generally very happy.
• Worry about the second sale. Making the first sale is really easy. But, it’s the 2nd and 3rd ones that are tricky.  By the time you get around to a repeat sale, it’s pretty obvious if you are living up to your promises or not. I always made it a point to sell with the repeat sale in mind.

Larry has truly become a legend in the paving industry and has left an indelible impression on his customers, friends and in the companies that he represented. He is proud that in a 40-year plus career, he’s only had three employers. The paving industry is small, and as he puts it, “It’s a pretty obvious field. What’s good is good and what isn’t is not. When you get done with a road, it’s there, for God and everyone to see. No excuses. I’ve tried to live my life that way too.”

Because of Larry’s hard work, dedication and example, the paving industry is a better place, and his legacy will endure. In paving jargon, his contributions will not soon be repaired, paved, rolled or forgotten.