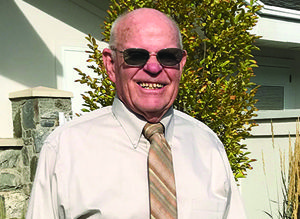 Harvey Hansen was born and raised in the Salt Lake area. He began working in the Asphalt/ Sand & Gravel industry in 1954 right after finishing High School. He went to work for Utah Sand and Gravel which later was purchased by Monroc. Harvey was hired as an asphalt plant operator and became very skilled at his trade. He excelled in becoming a welder and doing plant maintenance on the Asphalt Plant as well.

In those days people started working in an industry or with a company and planned to make that their career. Longevity was something to be proud of and led to advancements. At this juncture in Harvey’s life, those were his intentions as well. He was a hard worker, liked going to work every day, and enjoyed people.

Harvey devoted the next 23 years to his employer. During this time he fostered many friendships and met many people whom he could learn from and teach. He believed good ideas could come from anyone, not just the educated and management, and valued the feedback he received. In the lives of most individuals, there are people who have an influence or impact on their careers. In Harvey’s case, it was a bad manager who had the greatest impact on him. He learned there was a better way to treat people and a better way to do business, which led him to a career change. This change did not alter what he was skilled to do; rather, it pushed him in the direction of entrepreneurship within the same industry. Harvey started his own business in 1975 and named
it Asphalt Materials; however, most people just called it Harvey’s. He said it was easy to sell quality asphalt, but harder to sell low grade asphalt, so he made the decision to always strive to make the best mix he could. He has been the only man in Utah to have an asphalt mix named for him—“Harvey’s mix” and people still request it.

It was a great accomplishment for Harvey to create something that was successful. He felt great personal satisfaction in his achievement and did what he had to do to succeed. This was something he was very proud of. His business philosophy included the following: work hard and put in the hours needed, value employees, treat customers fairly and help them out if possible, be involved in the business operations, be honest and honor your word– his word was his bond.

There are four things Harvey feels strongly about that helped him be successful in his business and that he
believes would help others be successful. First, do something you enjoy. Second, work hard, put in the hours to make your business successful, and be committed to the company, not its income. Third, pay your bills first and save for future needs. Fourth, use good business practices and show respect to others.

Harvey has a few sayings that he lives
by which have probably added to his
success. They are:

Harvey had a good attitude, got along with others, enjoyed people, valued their opinion, and considered them equal, was diplomatic, and treated others fairly. In looking back on the past 45 years, Harvey has a feeling of
accomplishment and self-satisfaction that he was able to make his company a success and share a piece of his legacy with his family. It makes it all worthwhile when things come together.