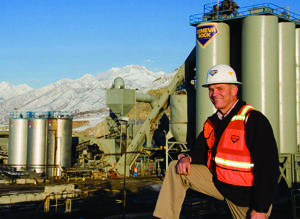 If you want to find someone with a good work ethic, one good place to start is with someone who has worked on a farm. Al Schellenberg is a good example.

He was born in Bern, the de-facto capital of Switzerland, and his family immigrated to the U.S. when he was two years old. During his years in middle school, the family ended up in Idaho, and Al honed his work ethic on the farms in rural Idaho around where he lived. He attended BYU and graduated with a degree in Civil Engineering. Shortly after college, he started a small concrete business with his brother-in-law.

He began working at Geneva Rock Products in 1972, which is a subsidiary of the Orem-based Clyde Companies. That first job, which he thought would just be short-term, turned
into a life-long career with the company. Al, himself has said, “When I first joined Geneva, I thought since this a family- owned company, there was probably limited opportunities, but I’d try it out for a few years.”

He has many great stories from his years at Geneva Rock. Early on, there was a misunderstanding surrounding a tire vendor and five turkeys, which led to Al being temporarily fired. He was of course rehired that same day when it was all cleared up.

Al’s career began with engineering and estimating, and culminated with him retiring in 2011 after having served as the president of Geneva Rock Products, the president of WW Clyde & Co., and the Executive Vice President of Clyde Companies. The in-between years were filled with many positions and varied duties, and as Clyde Companies grew, Al’s career growth kept pace. Al’s dedication to quality quickly became well-known in the industry. He was also known as a thoughtful leader and mentor. He was very clear that without good people not much would get done, and as a result, he went out of his way to reward and acknowledge the contributions of others.

Somewhere along the way he decided to use an acronym to express four words that became his personal life motto: Faith, Discipline, Integrity, and Christ … or FDIC.

In the years since his retirement, Al Schellenberg has focused on meaningful things, which is what he set out to do. Spending time with his nine children and 50 grandchildren,
has certainly kept him busy. However, he has also devoted significant time to civic involvement, and the Boy Scout program. He has spent considerable time and effort in his retirement helping with construction at scout camps all over Utah, and while he has received many accolades and professional awards, he has also been awarded the Silver Beaver Award from the Boy Scouts of America for the impact made on the lives of youth through service given to the council.